You will find below my recipe for Corned Beef and Cabbage as done in a crockpot. This year the task will be going to my sister-in-law, Susan. The crockpot has already been dropped off at her house.

Cover crockpot and cook on low setting for 11-12 hours.

Remove corned beef from crockpot and cover with foil to keep warm. Add cabbage wedges to vegetables and liquid in crockpot. Cover crockpot and cook on high for additional 30-40 minutes or until cabbage is crisp tender.

Remember the mustard and horseradish on the side for those who need a little more ZING!

Over the Thanksgiving weekend Dennis and I went to see the new Baz Luhrmann film Australia, starring Nicole Kidman and Hugh Jackman. Having read many reviews of this film, some great and some mixed, I figured we might as well venture out on Black Friday and see this epic film. What better way to spend two and three-quarter hours when a movie includes wonderful scenery of Australia, World War II history, an expose of the “stolen generation”, not to mention I could enjoy watching Hugh Jackman (People Magazine’s Sexiest Man Alive 2008) and Dennis could similarly enjoy watching the beautiful and talented Nicole Kidman. As we purchased our tickets, I noticed the theatre was giving away free Australia movie posters. What a treat! Not exactly like receiving a movie “program book” that I frequently received back in the 60’s and 70’s. Yes, I said “program book.”
These were souvenir books, some over 30 pages in length, that were part of your ticket price, typically produced for those major films like Dr. Zhivago (1965) and Hawaii (1966). And, yes, I still have some of these treasures, and remember that these movies often included an “intermission!” But, back to Australia…it is 1939. 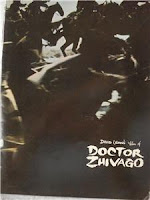 There is much to say about this movie and I really hope you will see it for yourself. What struck me the most is how Luhrmann managed to weave the 1939 movie, The Wizard of Oz, into his storytelling. And of course, there is the beautiful Oz song, “Over the Rainbow”. As I watched Australia I thought to myself, what is it about “Over the Rainbow” that somehow reaches your inner soul and magically soothes you. We all know that Australia is not the first movie that has incorporated “Over the Rainbow”, as I can name at least six other films, and it undoubtedly won’t be the last…so still the question remains. Why do people love the song “Over the Rainbow”?

Consider the following: “Over the Rainbow” was written in 1939; lyrics by Edgar Yipsel(Yip)Harburg; music by Harold Arlen; original performing artist was Judy Garland; won the Academy Award for Best Original Song (1939) and was voted by the American Film Institute as the Best Movie Song of all time. According to SongFacts.com, Yip Harburg’s “lyrics have a political significance. Harburg was expressing hope for America under President Franklin Roosevelt’s “New Deal” program, which was designed to get America out of the Great Depression in the early ’30s.” Hmmmm…

I suppose you are wondering what my blog post about Over the Rainbow, Australia and the magic of music has to do with Webconsuls’ primary services, SEO and SMO. Well, here is the connection. A few months ago, one of our clients, Whiteside Manor, Riverside, CA, asked us to create a video for their website. We had wonderful photos, but we needed just the right music. Dan contacted his friend, Paul Meredith, and asked Paul to record a version of “Over the Rainbow.” You can view the finished product here:

….’Somewhere over the rainbow… skies are blue
And the dreams that you dare to dream
Really do come true.’