At noon Friday, March 27, 2009, Ticketmaster started selling Phish concert tickets for their August 7 and 8 performances at the Gorge Amphitheatre in George, Washington. I am told this Amphitheatre holds 20,000 guests. However, I was on Ticketmaster at the appointed time and I was not able to buy tickets to this event. It was sold out within seconds. WANTED: 2 PHISH Tickets, The GORGE, August 7 and /or 8, 2009!

The tickets I am trying to buy have a face value of $49.50 each. So for a two people to enjoy a two day concert, the total ticket price should be $198. Current bids on EBay are up to $700! And if you really want to be shocked, go to eBay’s latest auction venue StubHub. Do a search for Phish George WA. Unbelievable. So much for technology. Keep in mind Phish cautions all fans as follows: “We urge you not to purchase tickets through brokers or “scalpers.” These tickets may be counterfeit in which case you will not only be overcharged but will also likely be denied entry into the show.”

You should know the tickets I am trying purchase are for my oldest son, Aaron. Aaron has been a Phish fan for more years than I know and this week he asked if I would try to purchase tickets for him using my Ticketmaster account. The plan was Aaron would be on one computer, I would be on another and two or three of Aaron’s friends (in other states) would try from their computers. At the appointed time we were all ready…and 5-10 minutes later we all received Ticketmaster’s equivalent to the blue screen of death: “Sorry, no exact matches were found, but other tickets may still be available.”

The annoying thing about this screen message is that Ticketmaster seems to want to deliver a hopeful message. They give you about 4-5 reasons why your purchase attempt may have failed, encouraging you to try again.

Today is Saturday and it occurs to me that life may have been a lot easier when technology didn’t provide false hope. So I will share two photos with you. Aaron listening to some tunes circa 1982 and Aaron showing off his first fish (Phish) 1984, Nome, Alaska. 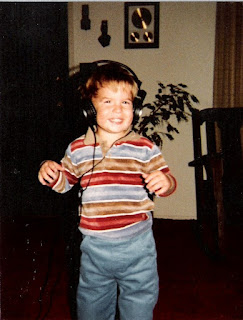 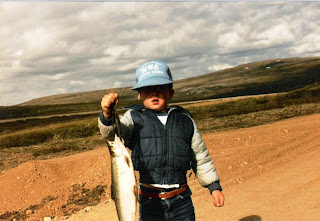