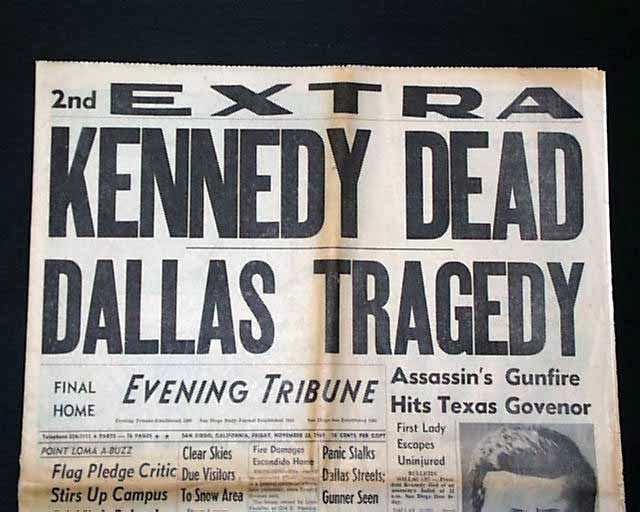 Somewhere in a trunk I will find a copy of the San Diego Evening Tribune dated November 22, 1963. There is also a copy of Life Magazine that was published November 29, 1963. I really don’t have to take the time to find these mementos, because my memories of a day long ago, to which I will dedicate today’s blog, remain vivid in my mind. 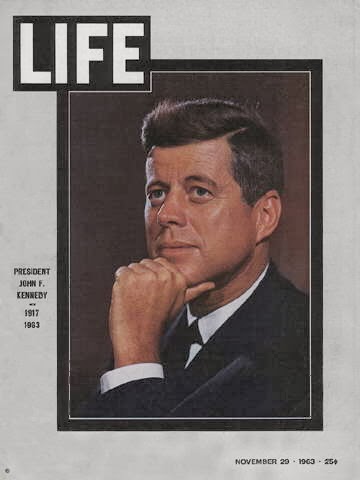 It was a Friday and I was a 14 year old high school freshman at Cathedral Girls’ High School in San Diego, CA. Every Friday the entire student body of 400 young girls attended Mass at St. Joseph’s Cathedral at 11:00AM. In procession we marched into the cathedral to take our pre-assigned seats in the pews. Sitting about five seats from me was another freshman that had a “forbidden” transistor radio in her purse. Shortly after 11:00AM this young girl slipped the radio out of her purse and, against all rules, she turned the radio on thinking she would be listening to the music of the day. Within minutes whispered talk was passed along the pew and we learned that President Kennedy had been critically wounded in Dallas, TX. This row of girls knew instinctively that we should certainly try to share this news bulletin with one of the nuns, perhaps Sister Anne Rita or Sister Eileen Leo (two young nuns who were more or less responsible for the freshman class). But how do we tell them without admitting that we were all breaking the school rules primarily by having the radio and secondarily turning it on during Mass?

We never had to admit our transgression, as suddenly Monsignor Rice appeared on the altar and whispered something to the young celebrant, Father Edward Brockhaus. And then, Monsignor Rice stepped to the pulpit and made the announcement: “President Kennedy has been shot and killed. When our Mass is concluded all students are instructed to return to their home room and be dismissed for the day. You will go immediately to your public bus and make your way home.” We sat in shock, going through the motions of Mass and as the final blessing was bestowed on us all, we walked solemnly down the aisle…to be met by local news media, congregating at our Cathedral, the center of the Roman Catholic Church in the San Diego Diocese. Outside I found my older sister, Agnes; she was a high school junior and crying we made our way to the bus stop and took the 16 mile drive to our home.

When we arrived home our parents were waiting for us with our other two siblings. The television was on and remained on for the next three days, non-stop. In 1963 there were only the major networks on the three San Diego channels, NBC, CBS, and ABC. But each network channel covered this life altering event continuously: such as the transporting of the President’s body to Air Force One with First Lady Jacqueline Kennedy walking next to the casket. (We did not have color TV, so we depended on the TV anchor to describe her pink suit, with matching pillbox hat.) Later we would see still photos of Lyndon B. Johnson being administered the oath of office aboard Air Force One. And still later we would watch as the President arrived back in Washington, DC. I remember we wept openly for three days. Our parents wept, a sight seldom witnessed by us. We all knew that our lives had changed forever. Within two days we were still watching live coverage as Jack Ruby shot and killed Lee Harvey Oswald (the suspected assassin).

On November 25, 1963, John F. Kennedy, Jr’s (John-John)third birthday, President Kennedy’s funeral took place. My memory of this day is that of my family sitting in the living room watching the procession, a graceful First Lady, the funeral mass, and dignitaries from all over the world gathering to honor our fallen President. And then there is the heart warming memory of little John-John saluting his father.

Every year at this time I stop and remember President Kennedy. Somehow life has gone on, 45 years since this fateful day. And every year I have wondered how life might have been had November 22, 1963, passed without incident. Today, Brian Williams of NBC Nightly News posed the same question

As an aside, I later met John F. Kennedy, Jr. He was a guest at our inn in March 1991. Imagine my surprise to realize that the young Mr. Kennedy had checked in late on a Friday night with his old college friend. The reservation was in his friend’s name. Suffice it to say, as the weekend progressed I asked John Kennedy if I could take a picture of him. He agreed and we went to our owner’s quarters. Our sons, Aaron and Daniel, then 10 and 7, sensed this was a special occasion. Aaron seemed to know that it was important for John to know how much his father had been loved by his parents and grandparents. He handed John a letter from his mother, Jacqueline, which had been sent to my father back in 1964, expressing thanks for the small donation my parents had made to the Kennedy Library. John stood quietly in our home, carefully studying this letter, his mother’s note, rubbing his hand against the paper and then with a smile he returned it to Aaron.

Yes, it is Saturday. This is not a technical blog, but you do have to wonder about a nation that connected 45 years ago today with television, radio, newsprint, photos, magazines and a common bond of a shared loss. This was a day that shaped our lives forever.

Feel free to leave a comment of your memories from November 22, 1963.