Do you wait for the mailman? I am talking about the US Postal Service employee. I think we all do this. We hope that the mail will include something more exciting than a bill. Today Chris Brogan published a video post “A Look In the Mail Bag.”  Did you watch it? Chris shared what I guess is a typical day’s mail, it included books to review, toys like a Carol Roth doll and an early edition of a Chevrolet Camaro model car…the list goes on, but he also received a toy pony from Jamie Eriksen of SEMA. Apparently Chris has a habit of telling people that if they ever get famous he would like a pony! As I watched Chris hold up the plastic toy pony I wondered what Chris would do if someday someone who became famous actually had a real live pony delivered to him.

It could happen you know. Chris Brogan wants a pony, not unlike how Jack Snyder wanted a baby elephant. Sales contests are still popular in the business world. We have probably all been involved in a sales contest, it really starts in school when they ask you to sell magazines, or cookies, or wrapping paper.  It is for some good cause and if you sell the most you win a prize. From these we grow into sales jobs. Sooner or later all jobs are about sales. And sooner or later there will be a contest. Prizes vary for sure. I once had a friend who won an all expense paid trip to The Masters in Augusta. (He was delighted until he realized the income tax implication.)  Even Chris is part of a contest. He helps people “sell” their stuff…and I am willing to bet that someday the pony is going to arrive, just like Annabelle arrived in Anchorage, Alaska, in 1966.

Remember now, this is 1966. Alaska had only been granted U.S. Statehood in 1959. Even today many companies do not make their products available to be shipped to Alaska or Hawaii, so you can imagine what went on to get two year old Annabelle, an Asian Elephant, all the way to Anchorage. She made it, but the next problem is where she would live. She couldn’t live with Jack Snyder and Anchorage did not have a zoo, so Sammye Seawell who owned the Diamond H Horse Ranch volunteered to house Annabelle in one of her heated horse stalls. Little 300 pound Annabelle arrived, Sammye fed her with a gallon bottle and for a while Jack Snyder would take Annabelle to his market everyday for his customers to enjoy.

By August 1969 the Alaska Zoo opened and Annabelle had a great new home, with both a heated winterized building and a beautiful natural outdoor enclosure.  I met Annabelle when I moved to Anchorage in early 1983. She was delightful and she was a painter. She earned her keep as her paintings were sold in zoo’s gift shop.

Annabelle lived to be 33. Her story never fails to make me smile. So today when Chris said he jokes about getting a pony I naturally remembered the famous sales contest “$3000 or a Baby Elephant!”  I can’t wait to see the pony!!!

How about you? What is the most interesting item you won in a contest or that you joked about wanting and actually received? 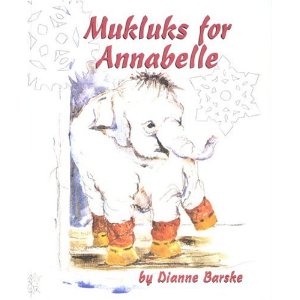