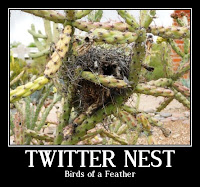 Twitter announced NewTwitter on September 14, 2010. They referred to it as a Better Twitter and they said it would be “rolled out” or coming soon to a nest near you. Yesterday, ten days into the roll out I received a message on my Twitter page: “Welcome to #NewTwitter!” I was shocked because after all, I only have 263 followers and I only follow 94 people. Come to think about it, maybe Twitter felt I was a good risk…couldn’t screw up too much or impact too many users, not like @corybooker or @chrisbrogan.

While I like most of what I have seen with the new Twitter I do feel that my quiet little nest is now home to Cuckoo Birds. Do you know about Cuckoo Birds? Many of the cuckoo bird species will not build their own nest, but instead lay their eggs in the nest of another bird species and let the other species raise their young!

What does this have to do with Twitter?  Well, with #OldTwitter if you RT something it is your image that appears in your followers’ Twitter stream; however, with the #NewTwitter it is the original tweeter’s profile avatar which appears in your stream. For example: I follow @johnschannel. He RT’d something from @shamelesshussy and instead of seeing John’s familiar avatar in my stream (which I will read and take note of) I see @shamelesshussy avatar which is a kitten. Imagine a kitten in my Twitter nest.  To tell you the truth, I don’t have time to figure out if I want to read this Tweet now that it does not have John’s avatar. I have to read the small print to know he RT’d it.

So that is why I think my Twitter nest is home to Cuckoo Birds, strangers who have been left there for me to nurture.

I would love your input!!! Let me know what you think of #newtwitter.