Did you ever come across an old photograph and wonder where and when it was taken? I actually inherited a number of photographs from my parents and my husband’s parents. Pretty soon I will hand them down to my children. But today, I thought about this particular photograph and it occurred to me that sharing it with you would be part of my marking Veterans’ Day 2009.

This photo pictures L-R Marie Julia Lynch (my mother), Joseph Raymond Eagen (my father), one of my father’s sisters, my father’s maternal Aunt Margaret Ryan (Mag), my father’s younger brother Bill (kneeling). This photo was probably taken in Great Falls, Montana, definitely taken prior to my parent’s marriage (1942) and later than October 1936 (the month of my father’s enlistment in the U S Navy). Based on the rather sad looks on everyone’s face, I am guessing this might have been taken around the time of my father’s mother’s death in early 1939. I do know my father was allowed to come back to Montana from China to see his mother before she died, as a special request to the US Navy. 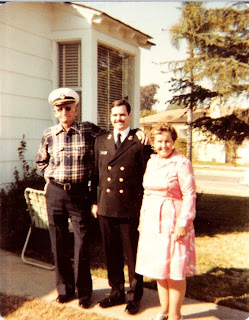 During my childhood my father would often take us aboard some of the US Navy ships that were stationed in our hometown of San Diego. I have these vivid memories of him boarding these ships and the young sailors saluting him. He felt at home on these ships and he was proud of his naval career.

In Winter 1979 my younger brother, Michael, was commissioned as a Naval Officer, a young ensign.
(See photo on right) While my father lived to see this event, he died shortly after on March 27, 1979. Some 25 years later I was honored to be invited to my brother’s Naval Retirement Ceremony. He retired as a Captain. At this ceremony a beautiful poem was read. It brought tears to my eyes that day, as it does today thinking how proud my veteran father would have been of his retiring son, Michael.

Today I am sharing this poem with you in appreciation to my father and all veterans.

For twenty years,
This sailor has stood the watch

While some of us were in our bunks at night,
This sailor stood the watch

While some of us were in school learning our trade,
This shipmate stood the watch

Yes…even before some of us were born into this world,
This shipmate stood the watch

In those years when the storm clouds of war were seen
brewing on the horizon of history,
This shipmate stood the watch

Many times he would cast an eye ashore and see his family standing there,
Needing his guidance and help,
Needing that hand to hold during those hard times,
But he still stood the watch

Today we are here to say:”Shipmate…the watch stands relieved.
Relieved by those YOU have trained, guided, and lead
Shipmate you stand relieved…we have the watch!”