Waiting for Godot on Broadway 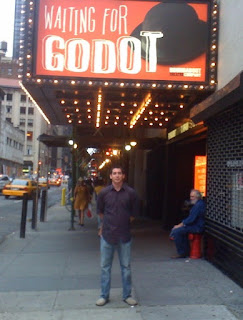 Last night your Sunday blogger, Dan, was literally Waiting for Godot on Broadway. Since Dan is traveling today, sans laptop, he asked me to post a blog for him. You may remember reading Dan’s May 24, 2009 post Waiting for Godot is Back on Broadway. In that post Dan reported that he was able to get tickets to last night’s performance of Waiting for Godot and he was beside himself with anticipation. After all, Dan was going to see this Tony nominated production with Nathan Lane, Bill Irwin, John Goodman, and John Glover.

I am sure Dan will want to write his own review of this production, so I will take this opportunity to tell the sidebar story of how our Facebook friends played a “role” in Dan’s ultimate adventure last evening.

When Dan first discovered that Waiting for Godot was playing on Broadway he went on line to see if and when he could secure tickets. It appeared that the only seats available at Studio 54 for the time frame that Dan could be in New York City were in the back side aisles. So Dennis suggested that we call Angela DeCicco, our longtime friend since 1992 and Facebook friend. I called Angela and asked her if she was familiar with the seating at Studio 54. She asked us why we wanted to know and when we told her that Dan was trying to get tickets for Waiting for Godot, she said “Don’t worry. Tell me when you want to go and I will have Matt (her husband) order “house seats” for you.” For those of you not familiar with the term “house seats”, they are ‘not available through the box office. “House seats” are some of the best seats in the theater, set aside for use by cast members, producers, the creative team, and others directly involved in the production.’ Keep in mind, these seats are not free of charge, you pay regular price, but they are the best seats in the house and Matt Stern (Angela’s husband is a well respected Stage Manager on Broadway) secured these seats for Dan! Just for fun, here is a photo of Dan with Angela taken on Broadway April 1997, when Angela was starring in the Broadway production of Les Miz. 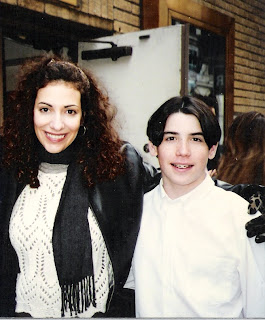 But back to Facebook…a couple of weeks ago I reconnected with a friend through Facebook, Beverly Brennan. She in fact is also a mutual friend with Angela. Beverly contacted me last week to say she had just read on Facebook that Dan was going to the city to see Waiting for Godot. She reminded me that she now works for ON Location Education and she tutored the two little boys who play the part of BOY in Waiting for Godot. I asked Beverly if there were anyway she could arrange for Dan to be able to go back stage after the performance. Beverly sent an email to the stage manager, but didn’t hear back. So last evening when the production ended, Daniel made his way to the stage door and waited. The door opened, a gentleman asked Daniel if he could be of help and Dan said something to this effect: “I am a friend of Beverly Brennan, the tutor for Matthew Schechter, and I am wondering if I can say hello to Matthew.” The gentleman asked for Dan’s name and said he would be back in a few minutes. The next thing Daniel knew he was backstage being introduced to Matthew Schechter and his parents. Matthew gave Dan a tour of the stage, introduced him to Bill Irwin and John Glover. All in all, quite a night for Dan and his friend, Josh.

Now if all this isn’t enough excitement…last evening I casually asked Daniel how were the “house seats”? He calmly replied, “They were perfect, Row H, dead center…and by the way I was seated right next to Harrison Ford!”

I have said it before, Broadway is filled with magic and the unexpected! Comments, anyone?