Why I send holiday greeting cards 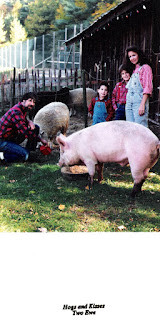 Every year I take on the “joyous” task of composing a holiday letter and creating a photo greeting card. Why I send holiday greeting cards other than to say I have completed a project, is that it gives me a sense of continuity. I have been responsible for this family missive for at least 30 years; however, due to circumstances beyond my control there have been at least two years that I missed, namely 1999 and 2003.

In 1985 I started the tradition of including a holiday photo of our family. We stood in front of the Eastern Slope Inn in North Conway, NH, Aaron was not quite five and Dan was just a few months shy of two. And so over the years, we have tried to gather for one quick moment to capture the memory of our years together. As time went by, I created funny little messages, as opposed to just saying “Holiday Greetings”. For example…the photo card you see here from 1989 ~ since we were gathered with the menagerie, my greeting said “Hogs and kisses two ewe!”

Our friends and relatives grew accustomed to this tradition and in the two years that I missed sending cards, we received phone calls, letters, and emails inquiring as to whether or not we were “OK”. Even yesterday, when we received a card from some very dear friends, she wrote on the bottom of her card: “We’re looking forward to your holiday news.”

Can you feel the pressure put on me? I hope so.

Steve Hendrix of the Washington Post said it best this week: “To the average mother, the entire social construct hangs on a once-a-year exchange of cardboard with best friends from third grade, long-ago piano teachers and cousins so far out on the family tree that they might be another branch of primates all together. And all the better if the missive includes a recent photo of the offspring (bonus points for one taken at a ski resort) and a whitewashed summary of the year’s family news.”

I received a lot of bonus points over the years as we owned a Country Inn in a ski resort town, so capturing a snowy scene was usually easy, and I have been known for not “whitewashing” the family news.

This yearly event has gotten more expensive, I don’t even want to discuss what it cost this year, with the cost of postage ($.15 per item in 1978 when Dennis and I married, and now $.42, which represents an increase of 180% over 30 years) and photo production rising as well. And I won’t mention the physical hours it takes for this production, I figure at least 15-20 hours for the whole process. It will take me a while to give up on this tradition.

I know we have blogs, email, telephones, text messaging, YouTube videos and Google videos, but there is nothing like waiting for the postman to arrive during the month of December. I look forward to hearing from friends and families. I read their letters, become slightly insulted if the card only contains a signature. I love the photos and, yes, I save the photos. It is fun to look at them and see how everyone has grown up, out, old, gray, etc. Just this week a card came from our dear neighbors from North Conway. And in the beautiful photograph appeared Eric and Matt Phillips all grown up, this year’s photo taken at Matt’s wedding to Molly. We first met Eric and Matt in 1986…and we enjoyed the photo and their mom’s letter.

Here you can enjoy my 2008 Holiday Greeting Photo…a few minutes in time.